Darin McBryde is making snacking healthier at worksites across the city.

As the district manager of Canteen -- one of the largest vending companies in the country -- Darin McBryde is helping to make snacking healthier at worksites all over Fort Worth and North Texas. He’s improved his own health, as well, by adopting the Blue Zones Power 9® principles. 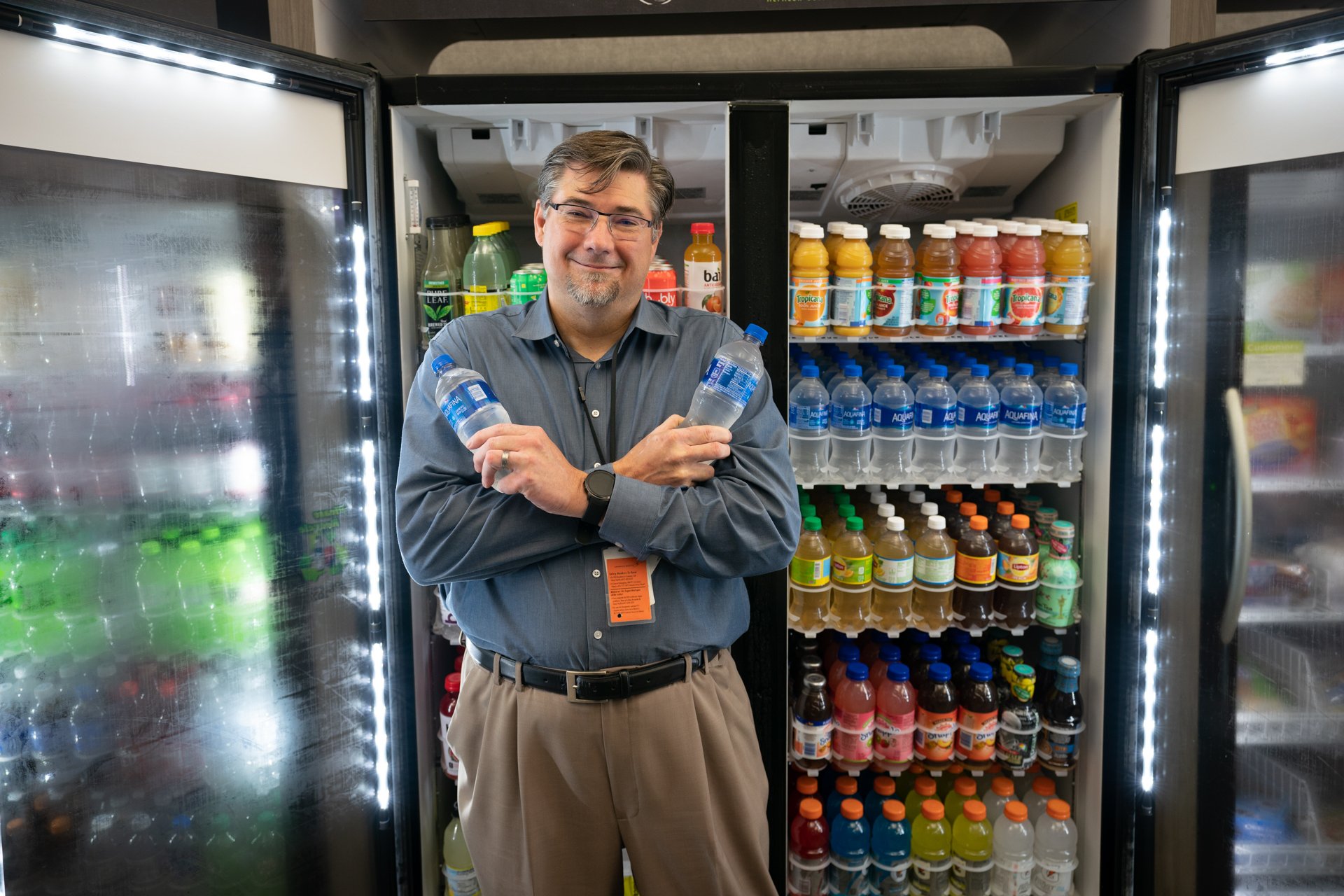 Darin McBryde is changing the way people snack at work.

As the district general manager of Canteen, Darin oversees hundreds of vending coves and machines at businesses all over North Texas, including Lockheed Martin – one of Fort Worth’s largest Blue Zones Project Approved worksites. When Lockheed Martin first got on board, Darin was approached to work with the company to overhaul its snack and beverage offerings. He was intrigued by the principles behind Blue Zones Project and set out to change the way of the vending machine. “I realized it wasn’t just another diet forced upon my vending business.”

Darin decided to reconfigure the vending options to offer and promote healthier choices. He sourced some healthier products, grouped them together, then raised the price of unhealthy products. Simultaneously, the price of sparkling water was lowered to $1. "We used an old-school merchandising tactic where we bring the items we want to showcase more to eye level, so that when someone is making a selection, the healthier option is the first thing they see."

The response has been strong, he said. Sales of healthier snack choices have risen as much as 19 percent at Lockheed Martin (versus 9 percent at typical vending sites off-campus), water is now a best-seller, and Canteen’s revenues from Lockheed sales are significantly above projections.

But working with Blue Zones Project hasn’t just benefited the health of Lockheed employees, it has also impacted him personally. Darin has Type 2 diabetes and has struggled with his weight for 12 years. He also survived cancer in 2008 (Hodgkin's lymphoma). He said that interacting with Blue Zones Project made him realize that his issues with weight and health weren’t just about diet but more about lifestyle. “I started changing the way I lived at home, spending more time with the family, out in the community, trying to change the way we ate at home and did things together,” he said. Since adopting a Blue Zones lifestyle, his A1C blood levels have dropped to about 5.4 (people with Type 2 diabetes have levels over 6.5) and he's been off his diabetes medicine for several months. He's also lost close to 100 pounds. “I feel great and don’t think I could’ve done this without Blue Zones Project.”

Darin said while encouraging healthy choices is just the right thing to do, many companies are also looking for ways to enhance employee well-being and improve productivity on the job. Because of the results at Lockheed, other companies are showing interest in joining the movement, he said. "Hopefully, eating habits change and the industry will change right along with them. I believe the additional companies interested in this approach and the success of Blue Zones Project in Fort Worth are a sign of things to come here in the Metroplex.”