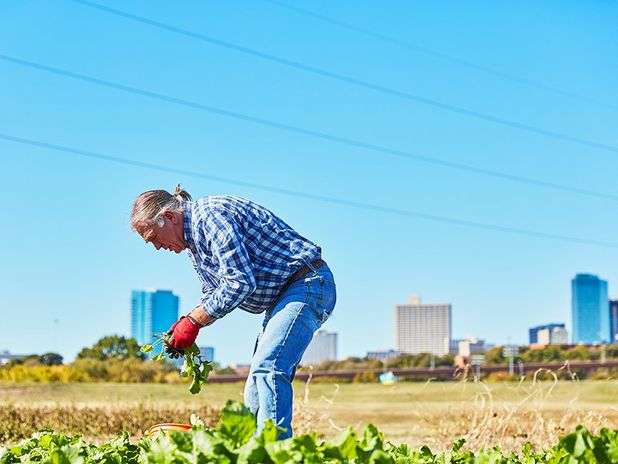 GROWING WELL-BEING IN FORT WORTH

Opal’s Farm and Individual Growers are Taking Advantage of New Urban Agriculture Ordinances to Improve Food Access Across the City.

If you ask a farmer, they’ll tell you nothing tastes better than garden-fresh fruits and vegetables. A tomato straight off the vine is significantly better than one shipped across the country. But until recently, it wasn’t possible to access that kind of fresh produce in all areas of the city. Today, residents are reaping the benefits of new urban agriculture ordinances that encourage local farming and make it easier for residents to purchase produce from home-based farms. Blue Zones Project worked with the city to implement the new policies and is now helping local growers and entrepreneurs take advantage of them.

Meagan Warminski is one such grower. She and her husband started selling produce from their garden on a 10-acre plot on the Far East Side, then worked 20 additional acres around them, growing cabbage, kale, okra and even jalapenos. Ordinance changes have allowed her to create a temporary stand to sell produce, which she has done in the Ryan’s Place neighborhood at MegPie Farms. “We love sharing what we grow. I am glad we can bring a little of our harvest to others,” she said.

The new policy removes zoning restrictions to growing, buying, and selling food – particularly in neighborhoods. The guidelines are also designed to allow vacant lots within the city to be used for the development of urban farms without rezoning.

Longtime community advocate Opal Lee has done just that. The 93-year-old retired teacher asked the Tarrant Regional Water District for some unused, overgrown land on the banks of the Trinity River, where she has created an urban farm. Opal’s Farms was built on the vision of bringing healthy options to the city’s food deserts, but it’s also providing a living wage to workers who want to help harvest watermelons, cantaloupes, peas, green beans, heirloom okra and other crops. “I see the food bank as a handout, but I see the farm as a hand up,” explained Lee, who envisions the eventual establishment of an agricultural college in the area. “There’s so much to do and so much for us all to learn. The farm is a unifier.”

Gregory Joel, manager of Opal’s Farm, agrees. “We’re not only providing food. We’re providing a place of education for young people. They don’t know where their food comes from, and we need to teach them. When they learn, I’m a firm believer they’ll change how they think, and our community will fully transform.” A portion of the Opal’s Farm harvest is donated to food banks; the rest is sold to local restaurants and at the Cowtown Farmers Market. Joel and fellow farmers, along with Blue Zones Project, are also working with the city to allow smaller pop-up markets at other neighborhood locations.

Blue Zones Project also worked with the city to allow push cart vendors to sell fresh fruit and vegetables instead of ice cream, to make healthy choices more accessible. That idea has been paying off in the city’s Diamond Hill area, where one of the first vendors to take advantage of the new initiative is regularly selling out of produce. With that success, Blue Zones Project hopes to encourage more vendors to take advantage of the opportunity,

Charlie Blaylock, manager of Cowtown Farmer’s Market and owner of Shine Farms, sees the benefits of all of these efforts. Blaylock is part of Grow Southeast, which operates under the umbrella of Healthy Tarrant County Collaboration. Grow Southeast has helped launch six community-based farms in Southeast Fort Worth, providing training and municipal navigation to help them become successful and self-sufficient. Blue Zones Project helps connect the farms to available resources. Blaylock left corporate America to become an urban farmer and believes strongly in food justice—communities exercising their right to grow, sell, and eat healthy food. “If we grow more farmers, who can grow more food, who can grow more customers, and those customers can help grow more restaurants, that’s good for our community,” he said.

Throughout Fort Worth, urban agriculture is helping people live out several of Blue Zones Project’s Power 9 principles for better well-being. Residents are eating with a Plant Slant – and Moving Naturally while they garden, building their Right Tribe of friends making healthy choices, spending more time with their loved ones, and putting Family First while they create and enjoy nutritious meals.

It is difficult to gauge how many urban gardens and farms have been created in Fort Worth since the introduction of the new policy. However, the Tarrant County Food Policy Council is currently working on a map that will identify all gardens and farms in Tarrant County. “Neighborhoods can be turned around through an agricultural intervention,” Joel said. “It doesn’t take a fancy program. It’s about building community. Something takes place with people when they work in the dirt together.”