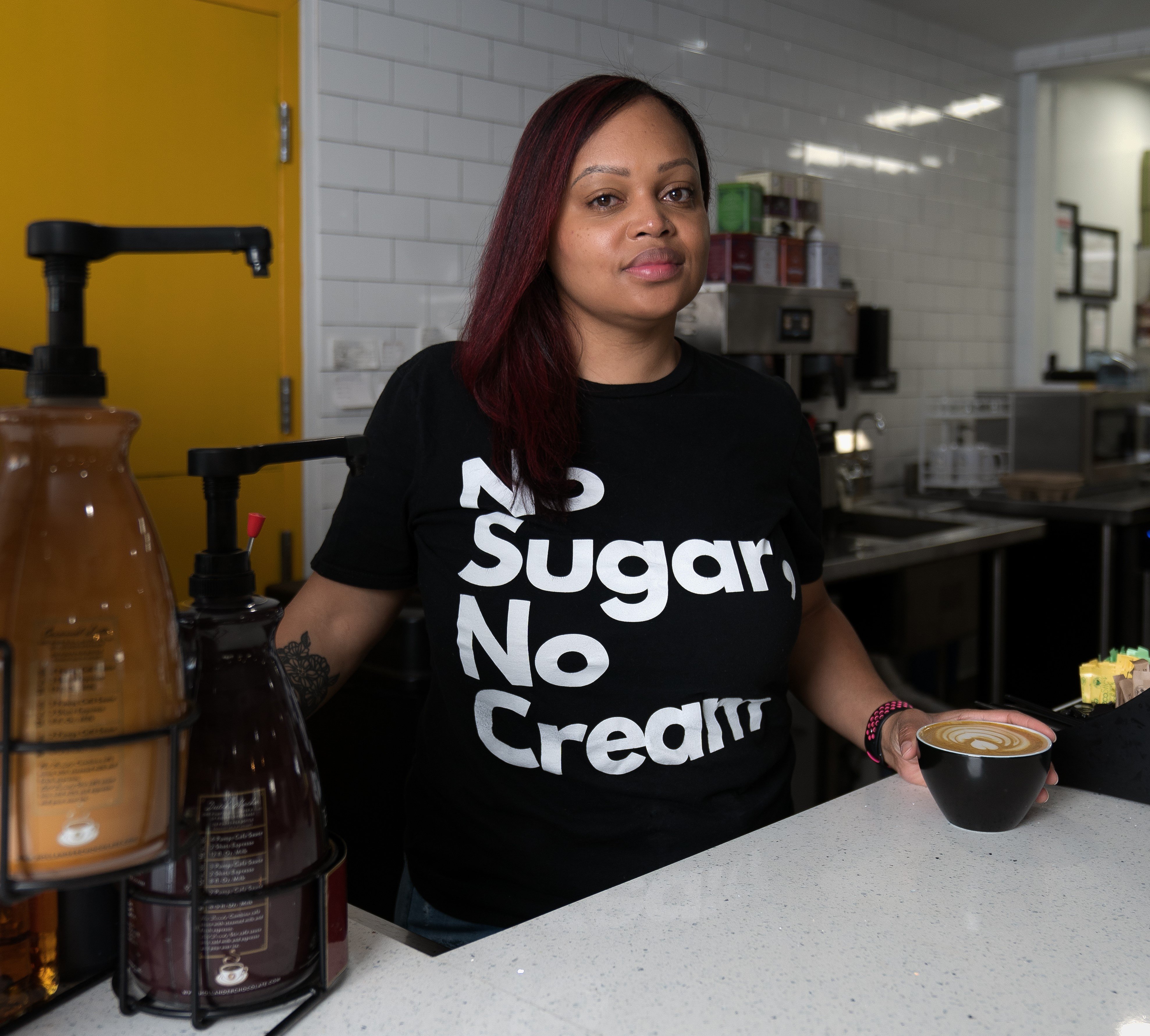 Mia Moss serves up great coffee, a sense of purpose, and a place to connect to family and the community at Black Coffee.

Mia Moss is the entrepreneur behind Black Coffee, still the only coffee shop in the Polytechnic neighborhood. Moss, who grew up in the Meadowbrook area, says that her decision to put Black Coffee in the 76105 ZIP code was partly business and partly about her family. “I didn’t want to travel so far for a cup of coffee,” she said. “The norm on Magnolia Avenue or downtown is walking to a coffee shop from your house. We need the same on the East Side.” The model in many Blue Zones communities, where people Move Naturally by walking from home to businesses and restaurants, is viable in East Fort Worth, Moss insists. “There’s a market here. We want to be there to show people you can put businesses here and people will patronize them,” she said.

Her entrepreneurial spirit sparked her sense of Purpose, one of the Blue Zones Power 9 principles which can create longevity. Black Coffee is located in the former Poly Grill, which sat empty near the Texas Wesleyan University campus for years until Moss and friends saw purpose there. She says she was encouraged to put her coffee shop in her neighborhood, but not necessarily by traditional funders. “Minority business owners have learned to do for ourselves,” she said. “I never thought about going to a bank and getting a loan – I didn’t want to be told ‘no’!” Moss began fundraising through a group of friends and associates. Her business will celebrate its third birthday this fall, and Moss’s Purpose is helping budding entrepreneurs see their pathways to success, like she found hers. To that end, she encourages entrepreneurs and small business to create community in her coffee shop. “Go get your education and come back to where you’re from and put that into a small business,” she said.

Moss says her love affair with coffee started in high school. For Black Coffee, she worked with a roaster to develop her own blends. Both the Poly Blend and the Eastsider Blend feature beans from Africa, the cradle of coffee civilization. “The Poly Blend is darker, but not overly dark,” Moss said. The Eastsider is more medium roast and highly drinkable on its own without cream. Both blends are also available at Central Market. About the only thing Moss isn’t doing is roasting her own beans –– “Someone who knows more than I do roasts them,” she said.

When Moss started her business, she also found her Right Tribe –– having a supportive group of people around and behind you is another one of the Power 9 principles for happier, healthier living. “When I started out, Janice (Townsend from Roots Coffeehouse) came over with her husband,” Moss says. “I love that we have a network of coffee shop owners who can lean on each other and learn from each other. It’s truly a blessing.” Moss, along with four other women who own coffee and tea shops in Fort Worth, established the C.A.T Crawl, where participants bought tickets for drinks at each of the locations. So far they’ve done a fall and a spring crawl with appropriately seasonal beverages. The connections that her Tribe of femme owners have produce mutual assistance as well: Earlier this year when there was a shortage of coffee plastic cold cups, the women banded together to help each other out with a bulk order so that everyone had what they needed.

When asked about how she Downshifts –– the Blue Zones practice of relaxing and loosening stress –– Moss says she keeps it simple. If she’s by herself, she says she curls up on the couch with a book. “If we’re all home, we do movie night with the boys (Moss and her husband Franklin have two sons, ages 6 and 12),” she said. “We also love The Coyote Drive-In. During COVID, it was a lifesaver.”

Moss fosters that art of connection and encouraging Right Tribe through partnerships with community non-profit organizations, groups, and individuals who have something to share. Go to the Black Coffee on a weekend and you might find a box of seed packets free for you to take so you can grow vegetables or flowers at home, or an entrepreneur selling vegan and gluten-free treats. She’s partnered with yoginis for stretching and meditative practice, and DJs for dancing and house music.

Moss’s roots are deep in the Eastside, and her in-laws and some family members are also entrenched as part of what she calls “the Ram Family” as graduates of Texas Wesleyan University. Moss definitely puts her Family First, and that also includes the university, which is growing right around her shop. Current partnerships with the Ram Family include an art exhibit for Black History Month. “We’d like to do more for the student population, like study nights,” she says.

But Moss also sees TWU’s giant growth spurt as integral to the potential revitalization of the Polytechnic neighborhood. Moss says her experiences over the last two years simply made her stronger. “The university is in talks to build a stadium, and there’s a new nursing complex near Black Coffee,” she said. “It’s the right time to invest here.”