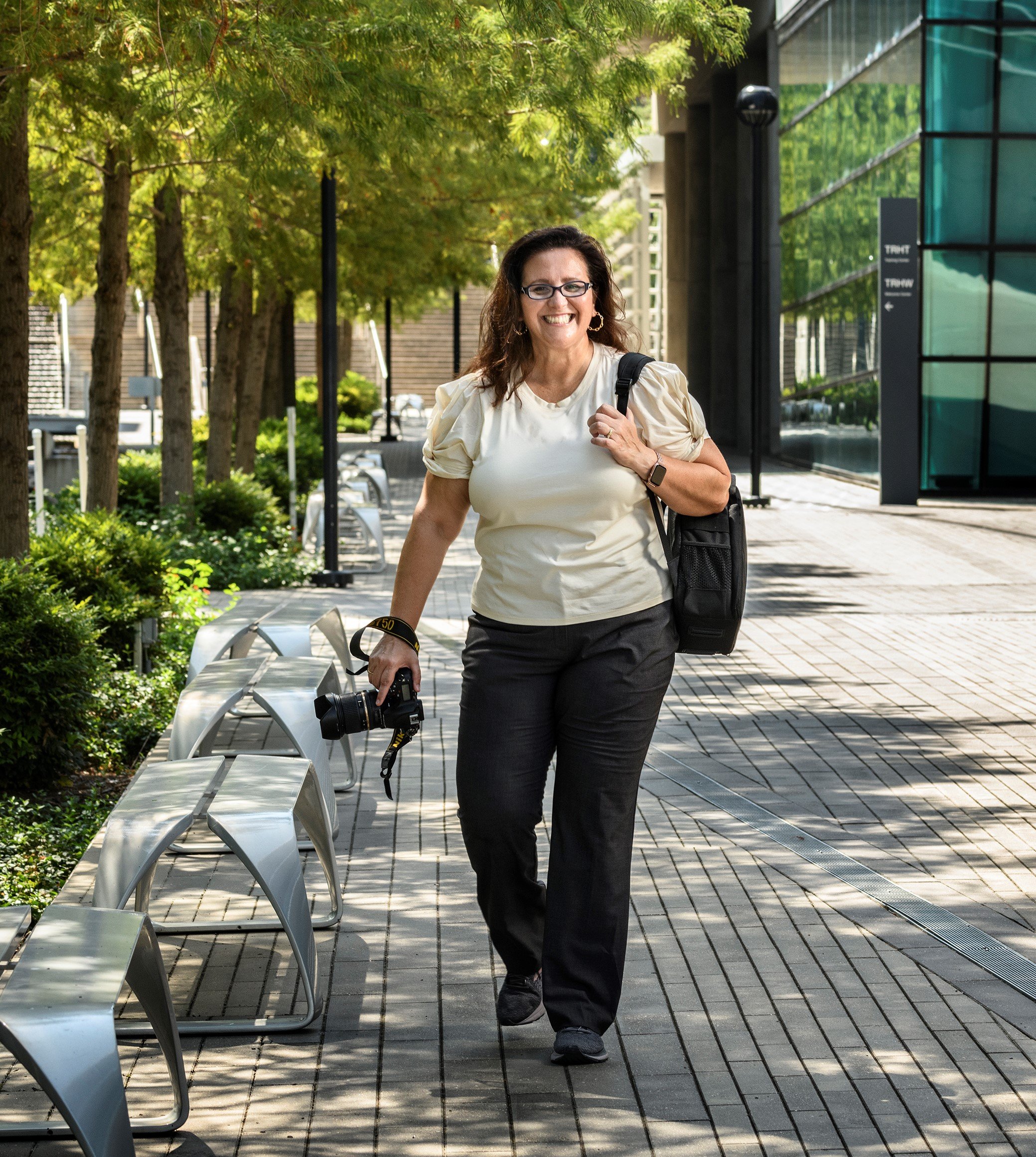 Rachel DeLira is pretty much always on the move. As a photographer and proprietor of StyleFW Pictures, she’s constantly on the run at fantastic events, working her magic so that everyone looks their best. When we spoke to her, she was editing a package of 2,000 pictures she took at the One Safe Place benefit. “I try to capture the whole story,” DeLira said. “I shoot in bursts of three so I can avoid the ‘blinkies.’ And I always try to make sure our key sponsors get a picture.”

While DeLira incorporates the Blue Zones Power 9 principle of Moving Naturally while on the job, she had a health scare so significant that it produced some additional life-changing results. After gallbladder surgery in 2014, DeLira was in “horrible pain,” and received devastating health news. In addition to having to recover from abdominal surgery, she also had Type 2 diabetes, which is not uncommon in the American population today. She says she received the health news in the form of some serious tough love from the doctor who did her surgery. “My doctor told me to pick out my coffin, because he said, ‘Your diabetes is killing you.’ He was trying to shock me, and boy, did it work.”

DeLira had gestational diabetes when she was pregnant, but the health condition – which in non-pregnant people may be associated with excess weight, a diet that’s too high in simple carbohydrates, and limited exercise – didn’t necessarily run in her family. “I bounced back after each of my deliveries,” she said. “My mom never had diabetes and my dad was borderline but never got it. This doctor didn’t know me, but he liked me enough to scare the crap out of me.”

DeLira’s response to her life-altering diagnosis was to lose 50 pounds. “I did a lot of reading, and my doctor’s office helped me,” she said. “Last year with COVID I really pushed the health kick and my A1C (the longitudinal marker of blood sugar levels over a three-month period) got to normal with some additional weight loss.” In addition to moving more on the job, DeLira works out by walking or a good run most days.

“I love my running in the morning – that’s become the new church due to everything that’s happened with COVID,” DeLira said. “It gives me peace and serenity. My joy is finding that 20–40-minute time to be outdoors. I love the outdoors, and I like that time to be with my spirit.” You could say that running outdoors is also her way of Down Shifting, another Blue Zones Power 9.

What started out as a potentially overwhelming health condition has also completely changed DeLira’s world view. “I have made diabetes an actual person in my head. I call it my ex-boyfriend,” she jokes. “When I wake up, diabetes wants me to eat the leftover birthday cake.” DeLira’s humor is poignant because she, like many of us, struggles with what she calls her “little inner demons that are holding us back.” In order to battle her diabetes, De Lira is adopting yet another Power 9 principle, Plant Slant, when it comes to her meals. “I am on week two of experimenting with eating more vegan,” she says. “I have a vegan smoothie in the morning. The flax seed and spinach help fill you up and it tastes pretty good.”

In general, DeLira credits her success to a total life change that features both exercise and a new mindset. “I changed the way I eat – have a breakfast that’s low in carbohydrates (protein, tea or coffee sometimes) a sensible lunch, and the goal is not to eat after 7 p.m.”

DeLira also makes exercise a family affair, a great way to put Family First. “We all go play tennis,” she says. “We used to be a band family – band is boot camp especially in the summer.” Her youngest son was on the junior varsity tennis team at his high school and wanted to improve his rank. DeLira said that her kids noticed the work she was putting into her exercise and eating habits. “My youngest lost 30 pounds, and he’s now on the varsity tennis team as a sophomore.” The goal setting has been important to all three of her children, and it’s something about which she speaks with justifiable pride.

DeLira and her family also move naturally by doing yardwork. “Everyone’s up and goes outside on the weekends to take care of the yard,” she said. Although menopause has paused her weight loss a little, she’s adjusting her course, because she’s in it for the long haul. “Look, my goal is not to be skinny. It’s to be healthy. I know I can get healthy,” DeLira said. “I hope that someone sees me and can be inspired, too. I represent a lot of women at my age. I did my time being a size 10 and now I can just be a healthy mom.”