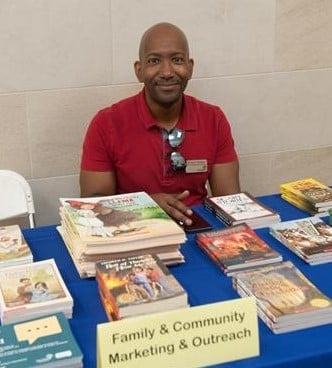 Richard Johnson uses the Power 9 to connect with Fort Worth ISD families, ensuring a successful – and healthier – future for all students.

Richard Johnson knows a thing or two about social connections and their importance to one’s well-being. Johnson works for the Fort Worth Independent School District as a Family and Community Outreach and Marketing specialist. “Our job is to share the amazing and positive things about the district,” Johnson said. He’s been there for 12 years and sees the value of connecting with students and their families, but also connecting families to larger community partners. All, he says, for the sake of investing in students’ success.

The Blue Zones Power 9 principle of Purpose can add up to seven years of extra life expectancy. Johnson’s purpose –– where he leverages his values, gifts, and talents –– is in making people feel “like the conversation involves them and includes them,” he says. Johnson formerly worked in higher education in student, multicultural, and academic affairs. Although he doesn’t specifically focus on the heavy lifting of getting kids college- and career-ready now, he understands that these challenges are what drives both elementary secondary education. “I have a passion for helping parents be more knowledgeable about what’s going on with their students,” Johnson said. “All parents, regardless of their background and regardless of how old their kids are, want their kids to be successful.”

Johnson says his own parents prioritized both hard work and participation in Johnson’s school activities, like debate team and school plays. “Some parents have never gone to college and don’t know what to do to get their kids on the right path,” he said. “We get the parents informed and let them know how to be successful.” Whether that’s in one of the district’s Programs of Choice, where students can get a jump start on a technical career, or in the Go Centers, where kids can learn test-taking strategies and get help with applications, Johnson wants parents to feel included and empowered.

For the parents who don’t have the experience of navigating the pathway that brings kids to their college or career readiness, Johnson has some simple advice. “Take advantage of the district’s parent support programs,” he said. “Talk to the counselors or parent specialists on campus. You’re not in this alone. Our job is to work in tandem with you.” By doing this, Johnson is involving the disparate groups of parents in the state’s fifth largest school district into a Blue Zones Power 9 principle called Right Tribe – knitted communities who work together, play together, and support each other. By proactively helping parents who don’t know where to start, Johnson and the district are connecting circles of families that ultimately strengthen each other. Working with people who uplift and support each other is critically important to both education and health.

Johnson shared a personal story that illustrates another Power 9 principle –– Family First. Prioritizing both children and aging parents with the investment of time and love strengthens communities. “I can remember getting off the bus and mom would lift me up and put me on the counter while she was cooking and ask me how my day was,” Johnson said. “I was so excited that someone wanted to know!” Whether your kids show it or not, Johnson says that children want to know that parents and family members care. “Never stop being their cheerleader,” Johnson said. “Always let them know they have someone in their corner.”

Parent information lines are a mechanism that the district has developed to allow family to contact the district and have their concerns addressed within 24 hours. Johnson and his co-workers were so committed to putting Families First in the FWISD that when COVID shut down the district in March 2020, the staff managed the information lines from their own cell phones. Even now he says he’ll occasionally get calls from families who talked with him 18 months ago because the parent built a connection with him. Those connections fuel Johnson’s Purpose. For his department at the FWISD, part of ensuring students’ success is assisting in promoting the district initiatives, like bond elections, the nearly universal pre-K initiatives, and the ease and simplicity of online registration. But regardless of parents’ educational levels, Johnson says the most important thing parents need to see is how their Family First connection helps their students. “Parents are their child’s first teacher,” he says. “What you do impacts your child’s future. The little things that you’re doing matter.”