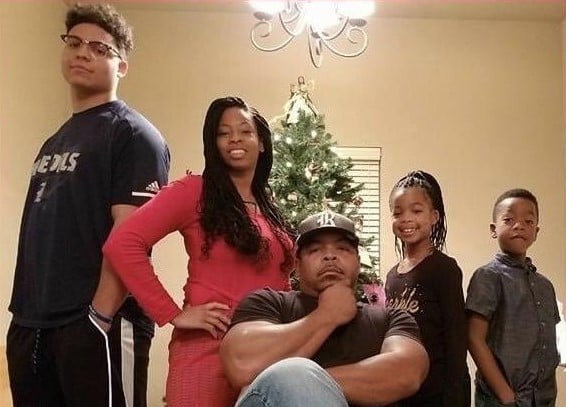 PLUG IN WITH "FAMILY FIRST"

Fun is the first priority when the Schuman family practices the Blue Zones Power 9 principle of FAMILY FIRST.

From roller skating in their living room to testing new plant-based recipes together, the Schuman family of Fort Worth invents fun and creative ways to practice the Blue Zones Power 9 principle of Family First. In the world’s original Blue Zones, making family time a top priority has been shown to lead to a longer, healthier life. That includes keeping aging parents and grandparents nearby or in the home, committing to a life partner, and investing time and love into raising children.

The Schuman family includes parents, Stephanie and Harold; 11-year-old twins, Isaiah and Iyana; Stephanie’s mom, Elena, who lives with them; and eldest son, Trey, a senior math major and football player at Rice University. “We’re a close-knit, goofy, competitive, outdoors type of family that loves to play games,” says Stephanie, a former child protective services officer and elementary school teacher. She recently went into business for herself as a Mary Kay cosmetics sales director so that she could spend more time with her loved ones. Her husband, Harold, has a degree in criminal justice and works for the Fort Worth Independent School District as an investigator.

The Schumans became involved with Blue Zones Project through the twins’ school, Westcliff Elementary. They learned about the Power 9 principle of Plant Slant and were inspired to add more vegetables to meals at home. The longest-lived people in the world’s original Blue Zones consume meat sparingly and focus their Plant Slant diet on fruits, vegetables and beans. Elena already followed a vegan diet, and the kids brought home ideas from school, encouraging their parents to try new ways of eating. For example, Elena and Iyana recently prepared a meal together featuring mushrooms, plantains, pita bread and homemade salsa. The family also grows fresh herbs, and Iyana has a taken on a gardening project cultivating a tree from an avocado seed.

Move Naturally is another Power 9 principle that the Schumans embrace. One thing they all like to do together is ride bikes. “My kids didn’t think I could ride a bike,” Stephanie recalls. “But I got out and rode with them, and soon we were racing each other up and down the hill. I just challenged myself to think about the things I loved to do when I was a kid, and now we share those things with them.”

In the original Blue Zones, the world’s longest-lived people don’t pump iron or run marathons. Instead, they live in environments that nudge them to Move Naturally, another Power 9 principle. The Schuman family loves to find new ways to stay active. Their affinity for roller skating is a highlight of a video that Harold and the twins produced about how they’ve entertained themselves during the pandemic. They fashioned a roller-skating rink in their living room, complete with disco-style lights and music. They jammed together in the “Cheese Ball” band, named for Harold’s homemade drum crafted from a plastic cheese ball container. Other pursuits included a quarantine car wash in the driveway and a chalk obstacle course on the sidewalk. “I’m a big kid, so I like to do active things with the kids,” Harold shares. “I will come up with a game for us to play in a heartbeat.”

For the Schuman family, putting Family First makes life more fun. The fact that this Power 9 principle can also improve well-being is just an added benefit to the joy that comes from spending time with each other and with their children.