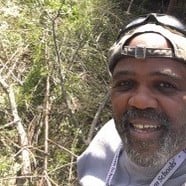 Overseer Elvis Bowman works to end food insecurity and inequity in Southeast Fort Worth through faith and farming.

Overseer Elvis Bowman of Greater Mount Tabor Christian Center reflects his passion for his community and his purpose in every conversation. The Blue Zones Power 9 principles of Purpose and Belonging have both been shown to increase longevity by up to 10 years each. If that’s true, Bowman may live to see the biblically significant age of 120! Bowman’s father, Pastor E.L. Bowman, founded the church, which was originally known as Greater Mount Tabor Missionary Baptist Church, in 1965. The church is named for a mountain in the Jezreel valley in Israel’s Galilee area, which was historically a gathering place significant to both the Old and New Testament. In the Book of Judges, the Israelite leader Devorah gathered an army there. In the Book of Mathew, Jesus’ transfiguration was believed to have occurred on Mount Tabor. Whatever you believe, the church has been one of the rocks of the community for five decades. The younger Bowman took over the pastoral reins over 20 years ago.

Bowman’s actions on behalf of the community he serves comes as easy to him as breathing. “There are about 22,000 residents in zip code 76105, and the median income is $24,000,” Bowman says. “The median home value is $49,000 in these six square miles. That’s why we stay.” As Bowman adds, “We know how to have church within the four miles. Outside is where the work begins.”

Bowman says that Greater Mount Tabor has an unparalleled opportunity to address both food insecurity and the lack of employment in the area. “Food insecurity leads to heart disease,” along with other complications due to lack of access to fresh produce. Eating with a plant slant, another Blue Zones Power 9 principle, can have a significant impact on longevity and health. According to Bowman, it’s a good five miles to buy quality produce in the area. That’s where Tabor Farms comes in.

Greater Mount Tabor Christian Center sits on over 40 acres of land in southeast Fort Worth. The church has turned over a three-acre portion of land to become Tabor Farms, part of Grow Southeast, a coalition between the Office of Commissioner Roy Charles Brooks, The Healthy Tarrant County Collaboration, and CoAct, aimed at addressing food and economic inequities in the area. The five Grow Southeast farms, which also include Opals Farms (named for legendary Fort Worth activist Opal Lee), and Mind Your Garden Urban Farm, target 35 miles of the city where there are plenty of liquor stores and fast food restaurants but only two grocery stores and few places where residents can reliably buy plant-based options. The farm has had its share of growing pains in obtaining permits, electricity for cold storage, and, most recently, having to commission a well to water the acreage. “Nobody knew the first of this year we’d get so much water,” Bowman says with a laugh. Still, he is hopeful that they’ll begin planting produce in the fall, with adequate cold storage and processing facilities for the harvest.

Bowman sees the urban farm as a way to address both the lack of fresh produce and the area’s underemployment. But he also proposes the urban farm as “another tool for students to explore agriculture in an urban setting.” How many Fort Worth students actually know where their vegetables come from, or how to grow lettuce or a carrot? Bowman also says the farm offers STEM opportunities: Calculating how many seeds you need to plant for half an acre is both a practical reality for the farm and a simple algebra problem. Watering a garden is also a science problem and a physical one. Helping southeast Fort Worth grow is a labor of love for the purpose-driven Bowman.