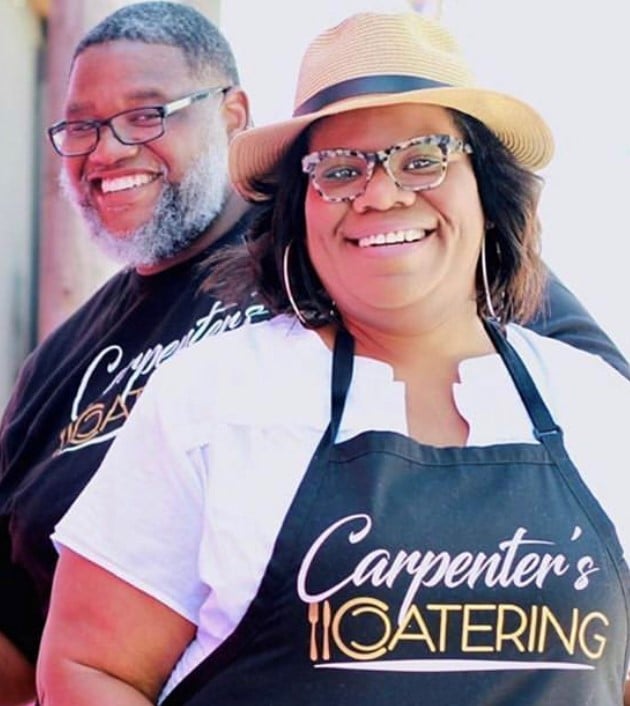 Katrina and Travis Carpenter have weathered a year of ups and downs since opening their brick-and-mortar restaurant in February 2020, after they’d had a successful six months in a food truck stationed on South Main. A month later, their fledgling, eponymously named café was shut down, as all restaurants were, due to COVID-19. But Katrina Carpenter says the power of her Right Tribe – a Blue Zones Power 9 principle – gave them hope and kept them afloat through June. “So many business owners on the Near Southside shared the experiences they had with us,” Carpenter says. “The owners of the Bearded Lady came in, ate and shared pictures on their social media.”

The Fort Worth-born Carpenter says her community is all of Fort Worth but acknowledges that the love she got from her Tribe “played a huge part in our surviving.” “They were very intentional about what they were doing and very consistent,” Carpenter says. “It felt more like ‘Let me grab your hand and help.’” A connection to the Fairmont neighborhood also linked the Carpenters to the Facebook Data Center in North Fort Worth. As an “essential business,” the Data Center reached out to the Carpenters and a few other locally owned restaurants to provide meals to all their working shifts. That allowed Carpenter’s Café to continue to operate until restaurants could reopen their dining rooms.

“When people ask what makes this restaurant different – we’re Fort Worth born and bred,” Carpenter says. “There are not a lot of restaurants that are fully locally sourced. We offer a unique menu selection that has something for everyone.” And Carpenter means it. If you’re doing your best to eat with a Plant Slant, Tasha’s Toast is a delight: gluten-free toast covered with avocado, spinach, tomatoes, microgreens, a dash of truffle oil and a non-dairy, slightly spicy vinaigrette dressing. There’s also a veggie wrap and a vegetarian quiche on the menu.

It was through the Near Southside Tribe that the Carpenters met Marty and Marilyn Englander, who bought Kent & Co. Wines, which they’ve now rebranded as The Magnolia Wine Bar. “They had our backs from day one,” Carpenter says. “When we moved to Pennsylvania Avenue, Kent & Co. was serving our chicken salad on the menu. When the bars got food licenses, we brainstormed about what we could provide.” And Carps at Magnolia was born. Carpenter says the menu of six to seven shareable, easy-to-eat items will run Thursdays through Saturdays when Magnolia Wine Bar offers live music. The menu will be almost completely different than at Carpenter’s Café, although it will include the vegan Tasha’s Toast. Carpenter says that menu creation is one of her greatest joys. “I’m not a burger person,” she says. “Whenever I create a menu item, I want to make something I can’t get down the street.” And she says she’s looking forward to a little Wine @ Five, another Blue Zones Power 9 principle.

Katrina Carpenter’s generosity is legendary, whether it’s donating food or helping out another woman-owned business. Even during the height of the restaurant shutdown when the Carpenters were struggling, they continued to give back, donating food to frontline hospital workers through Protect the Fort. And Mia Moss, who owns Black Coffee in Fort Worth’s Poly neighborhood, tells a story about how Katrina Carpenter took care of her during the week of Fort Worth’s February deep freeze, when stores were critically low on supplies and restaurants weren’t getting their deliveries. The area around both Poly and the Near Southside is lean on grocery stores, and Carpenter says she was all the way over in Mansfield at the Sam’s Club. “I told Mia all they had was organic milk, but they had eight, and I said I’d give her six (cartons) and keep two.”

As far as Carpenter’s Café goes, Carpenter says that they made plans for a big one-year celebration because they never really got to have their grand opening. But as luck would have it, that week was the polar freeze in Fort Worth. “We were planning a first anniversary and the day we were going to do it we ended up donating meals to the Funky Town Fridge,” she says. “Two scheduled celebrations in our current space have been postponed. I can’t help but feel like we will celebrate in a grand way somewhere else soon.” Whether it’s a strong sense of Purpose or simply perseverance, Carpenter says they’re not going anywhere any time soon. “I know this is what we’re supposed to be doing because we’re still standing.”