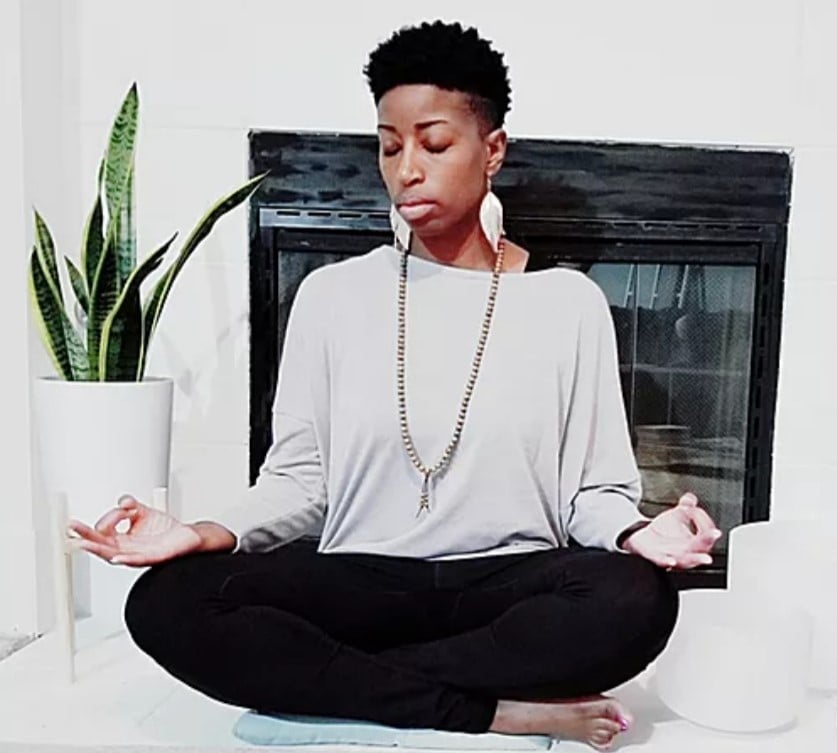 If you spend any time with Leittia Knight, you’ll notice two things: She’s likely to make you laugh, and at some point in the conversation you’ll find yourself doing some deep breathing –– in through your nose, down to the bottom bases of your lungs, and then out. Not because she tells you to, but because when Knight starts talking about mindfulness, she literally exudes the Blue Zones Power 9 concept of Downshift.

The Power 9 principles are nine healthy lifestyle habits shared by those who have lived the longest in the original Blue Zones areas of the world. “I do my best not to buy into this fast-paced culture,” she said. “Only I know when I need to take a moment. It’s about personal accountability and self-care.” With her training as a certified Mindfulness teacher, the self-styled “Spiritual Gangsta” runs Authenticity Movement, where she provides tools and teaching for people who want to downshift from the stressors in their lives. In this,

Knight is a medical technologist by training and worked for four years in a clinical lab. Now as an IT specialist, Knight says she’s “connecting machines and no longer running them.” As a self-professed lifelong learner, Knight weaves the pathways of science and metaphysics. When she’s not working at Texas Health Resources, she conducts mindfulness workshops for both adults and children, sharing the power of her purpose with anyone who needs it.

“Science drew me to mindfulness,” Knight said. “If we can heal our minds, we can heal our bodies. I have done it myself.” Knight developed psoriasis, which is an autoimmune condition, at age 35. “All of a sudden I had this full-blown flare-up,” she said. “I had no idea I had this autoimmune disease.” Knight said she had to figure out what was causing so much stress that it brought on an autoimmune flare. The answer, she said, is simple. “Remove the stressful thoughts and you will be well.” Now in every situation, whether it’s an instant message or a text at work or dealing with the online world of her daughter’s virtual learning, Knight asks herself: Is this worth me activating my nervous system? “People think of living mindfully as being weak or passive but it’s the opposite,” Knight said. “You find your voice.”

Through her mindfulness training, she’s found another key Power 9 principle: Purpose. As a young Black woman in a traditionally male-dominated profession, Knight’s perspective is informed by her training. Using this sense of purpose, Knight started running Ubuntu healing circles (a South African word/concept that translates to “I am because we are”), specifically for people of color to have a space to heal. “Liberation is a state of mind – you don’t need to wait for someone to liberate you,” she said.

A single mom of a teenager, Knight says that prioritizing self-care is a must. “Taking care of yourself is not a luxury,” Knight said. “It’s hard to work well when you’re tired. Rest is an act of self-care. Eating wholesome foods is self-care.” Knight learned from her mother, who cooked most of what the family ate from scratch at home. Friday nights were “Mother’s Day,” where the family would eat out. But she grew up “not eating anything out of boxes,” and Knight calls herself privileged for that.

That’s right in line with another Power 9 principal –– Plant Slant. “I’m not a full-time vegan but I do dabble,” Knight said. “A couple of days a week we do plant-based meals. And breakfast, we’re intentional about what we put in our bodies.” That means a veggie and fruit smoothie to start her day working from home and to start her daughter A’Mya’s day of virtual school. “I’ve struggled with this transition [to virtual learning] myself,” Knight says. “I’ve had to tell myself this is a moment. Things will not always be this way.” Knight is especially invested in mindfulness when it comes to her daughter. “I am her example of how to respond,” Knight said. “She is watching me.”