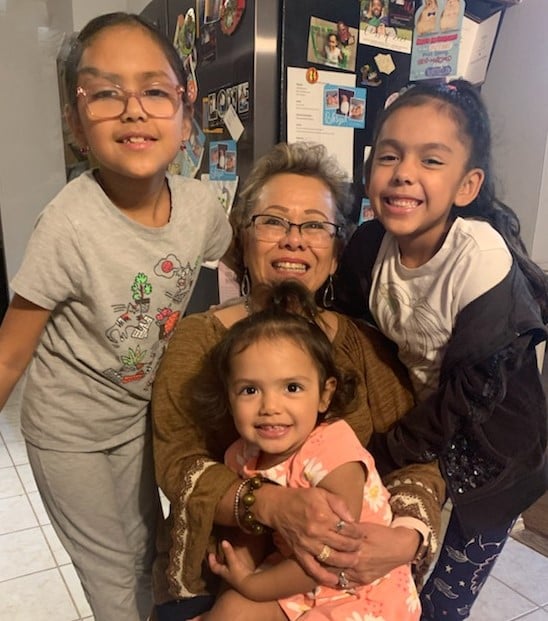 Maria Buendia learned that she had to take care of herself in order to put her Family First.

If you spend a little time with Maria Buendia, you’ll walk away from the conversation wondering how she accomplishes everything she does in a day. The long-time Fort Worth ISD employee volunteers for Blue Zones, takes care of her family, and still finds time to Move Naturally –– one of the Blue Zones principles for healthy living, which encourages people to move more a little bit each day for greater health. Putting loved ones first is a common trait among the world’s longest-lived people. She’s the oldest of four children, so Buendia’s role in her traditional family is to help her mother and father with their health and social needs. Centenarians in the original Blue Zones areas of the world find that keep aging parents nearby brings a multi-generational health benefit for both parents and their children, and Buendia considers herself blessed to be at the heart of her four-generation family.

Buendia’s Blue Zones journey to health began when a former coworker enlisted her help in volunteering to deliver supplies to FWISD campuses. At first, Buendia was delivering literature about healthy eating and the Blue Zones Power 9. Now in the middle of a pandemic, she’s delivering safety and hygiene supplies for teachers and staff, along with books for students. Buendia says that the Blue Zones philosophy of simply moving a little more to increase longevity caught her attention, and the act of volunteering can create meaningful connections that improve health in those who volunteer. But a bout with COVID-19 hammered home the need to take steps to improve her health so that she could continue to care for her parents, children and grandchildren. In June, Buendia, her husband, and youngest daughter all became sick. Buendia, who has diabetes and rheumatoid arthritis, says she “got right with God in my prayers.” As everyone slowly recovered, Buendia realized that the time she’d spent in bed wasn’t making her joints feel any better. So, she started a simple regimen.

“In the morning, I get up with my husband, and get him off to work,” she said. “Then I start my day by walking in the park behind my house.” Buendia’s morning routine has grown to include bicycling, and she’s discovered that moving more pays some immediate dividends. She’s lost weight, which she believes is helping her manage her Type 2 diabetes. “I have to do something for me,” she said. She says for years her doctor told her that gentle exercise is important for managing her arthritis. “And the more I move, the less pain I feel,” Buendia said.

Volunteering with Blue Zones has paid an additional dividend in the form of dietary change as well. Buendia says that adding a Plant Slant to her diet –– increasing her consumption of raw fruits and vegetables while reducing animal products -- has actually led to what she calls “a change in my taste buds.” She says that when she changed her diet, she became more accustomed to eating plant-based meals and less meat.

Buendia’s close-knit family includes her parents, her four children, and three grandchildren –– with a fourth arriving any day. Buendia’s four children are in varying stages of departure from her nest. Her oldest daughter’s a nurse, and her youngest son is a Marine. Her oldest son just left home, but still comes back for a meal or a haircut. Her youngest daughter is a student at TCC and also works at the Fort Worth ISD. “A mother’s job is never done,” Buendia said.

Lately, activity has become a generational thing for her family. “I tell them, don’t stay locked up inside,” she said. She’s sharing her passion for being outdoors to her grandchildren. “You have to be outdoors –– not in a gym,” she said. Buendia walks with her grandkids, and in the summer, they swim. “They know they can grab grandma and she’ll play with them,” Buendia said.