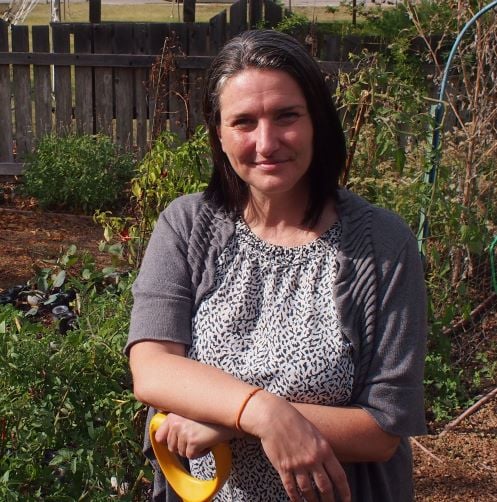 A green thumb brings a sense of Purpose to Mary Jo Greene.

You don’t have to dig deep to find Mary Jo Greene’s Purpose. The effervescent Brit, who’s a gardener by trade and a teacher by training, is exceptionally passionate about gardening. “I’m nothing special in England,” Greene says. “I come from a culture where people garden.” In the United Kingdom, schools incorporate the fundamental task of teaching children how things go from seed to plant to plate. “Most schools have a garden in the UK – it’s wrapped in the curriculum,” she says.

Greene, who works with Blue Zones Project facilitating gardens and the love of growing things in several Fort Worth schools, wrote a curriculum for preschoolers that also features math, sensory integration, art, play, and, of course, eating what they’ve grown. “Gardening is exploratory and intuitive and really doesn’t have to be taught,” she says. And she finds that the garden is a great equalizer. “A garden is an incredibly leveling space – there are no wrong answers,” she says. “It’s intuitive once you’ve gotten past ‘Don’t stab your friend with the tool’!”

Britain’s finite island borders mean the country imports what can’t be grown or made there. And the wartime efforts from World War II have stuck with the population through generations, Greene says. During the war, the rolling yards at Buckingham and Kensington palaces were turned over to grow food. “That stayed with us -- we put gardens in communities and backyards and schools,” she says. “The allotments (community garden plots) are protected in England by fairly complicated laws that regulate the land use, and you can rent one for about $12 a year.”

The transition to Texas was eye-opening for Greene, the granddaughter of people who worked in gardens in the large estates in Britain. “The prolific perennial crop is lawn here,” she says with a laugh. “When I first got here, I thought Texas was a truly punishing environment for a garden – but it’s an optimum place to grow, both in spring and fall where you can second crop things.” With perennials and annuals that can be planted year-round, there’s literally something to see, and something to eat, all the time. Lettuce is a surprisingly robust and hardy plant; Greene says the lettuce in her school gardens survived the brutal February cold. Additionally, gardening can provide a lesson in patience. “Carrots take ages to grow,” she says. “When kids grow a carrot, they are likely not to throw it away because it took so long to grow.”

Gardening also offers young children a window into eating with a Plant Slant. “Kids won’t eat a snow pea at a table, but in a garden, they will at least try one,” Green says. “Maybe it’s peer pressure, or maybe because they grew them.” Growing food “ticks a lot of the Blue Zones boxes,” including building a sense of Community, Downshifting and Moving Naturally: Greene says in the garden there’s a lot more lifting and moving naturally. “We’re not using electric tools, which makes moving more naturally possible,” she says.

But the most important thing Greene’s noticed is the difference in how food is viewed by people who grow some of what they eat. “Being from Britain – I brought over a kindergartener and a 5th grader, and it was like being given the key to Willie Wonka’s factory. There was so much sugar, even in the bread.” The way we shop was also eye-opening for her. Many Brits don’t have giant refrigerators and a second freezer so they end up shopping every few days because they have neither the refrigeration or the space to store food.

“Look, 80% of a Texan portion size is still too much food,” Greene says, referring to the Blue Zones principle that encourages people to stop eating before they’re full. “The portions are utterly incredible. And so many people eat in their cars.”

While many of us struggled with the isolation in 2020 brought about by COVID, Greene believes that the realization that we’re are at the mercy of the supply chain may kickstart an interest in gardening, or at least in people’s desire to support local farmers markets and local producers. In addition, with spring coming, it’s the perfect time to enjoy gardening before the summer heat starts. “There’s joy and satisfaction in growing something,” she says. “Let’s not abandon how the rediscovery of the outdoors and happiness feels.”