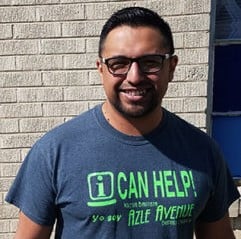 Iglesia Bautista Azle Avenue Baptist Church began in 1996 as an offshoot of a Hispanic mission within Rosen Heights Baptist Church. “We wanted a church representative of the community,” Lead Pastor Fernando Rojas says. In 2001, that offshoot found a permanent home when members of the Azle Avenue Baptist Church, a religious institution on the North Side since 1936, invited the fledgling group to join with their congregation’s primarily aging members. “We’re grateful that they wanted God’s church to continue and be transformed,” Rojas says. And he helped with the transformation, first as a member of Rosen Heights Baptist for 24 years, and for almost nine years as associate pastor at IB Azle Avenue.

Rojas definitely puts Family First – his favorite Blue Zones Power 9 principle – and sees his church as a family. Rojas and his parents came to Texas 30 years ago with no other family around, and perhaps that’s why he feels the connection so strongly. “My daughter grew up with kids in the church youth program who are now her family,” he says. His Family First approach stems from a simple idea: “Nobody’s perfect, starting with the pastor,” Rojas says. “Family are sometimes crazy, and they’re the people you fight with,” he adds. “We’re imperfect, but we’re also blessed. Family support allows people to change.”

Now 20 years in, IB Azle Avenue has truly embedded itself in the community. There’s the Read2Win program, which pairs high school students with first and second graders who weren’t reading fluently. Rojas says that the high schoolers get as much out of the program as their younger partners –– many of the older kids struggled with reading when they were younger, and are able to give the elementary students the gift they wished they’d had.

IB Azle Baptist also partners with W.J. Turner Elementary with the curriculum-based “Highly Capable Children” program. Rojas describes the 13-week program as “a walk alongside parents.” The curriculum measures 40 goals, including safety at home, presence at a house of worship, and parent involvement in a child’s school –– all ingredients to creating resilient youth. When they noticed that the Highly Capable Children program was attended primarily by mothers, Rojas says the church started an All Pro Dads chapter at W.J. Turner, where fathers can have breakfast monthly with their kids and connect with them at school.

Then there’s the Walking Bus. Turner’s children often congregate near the church –– it’s a safe place. For the last four years, the church has sponsored a walk to school for children and families. On every corner there’s a physical activity, like jumping jacks, to encourage the kids (and parents) to Move Naturally, another Power 9 principle. Mayor Betsy Price, former City council member Sal Espino and current Council member Carlos Flores have come to cheer them on. Rojas often preaches about stewardship. “We’re stewards of all God gave us,” he says. “Whether that’s families, relationships, or bodies.” And he sees Moving Naturally as a part of that stewardship.

One of the most important things the church does for its members is assist with immigration aid, in partnership with the Mexican Consulate. “We help people who need to get or renew their passports, find their birth certificates, or obtain a US ID.”

Like many churches, IB Azle Avenue closed the doors last March when COVID-19 hit. They tried on-line services, but knowing his faith family, Rojas saw how congregants struggled with the lack of human touch. The church re-opened last June, with strict infection control procedures that are still in place. They moved chairs and utilized an unused balcony to create social distancing. Now the religious classes are back to meeting in person, and Rojas says that people have been willing to continue to do what is needed to care for each other. He says his congregation – his Right Tribe -- was more than willing to mask up. “We’re called to love God and care for one another,” he says. “Wearing a mask is part of that.”